Home > Jean > Advice from a Cat

Advice from a Cat 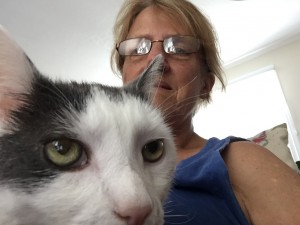 This is Henry, a cat who thinks he’s a dog. Now a mature 14 years old. I write a lot about dogs, and Henry told me that I need to include him more often as he’s smarter than they are. Okay, Henry, it’s your turn.

Unlike many cats, Henry loves to be held. And nothing scares him. If a friend’s dog comes into the house, Henry will march right up to him. (Not always a great idea.) But thinking about this, it’s kind of smart to be like the thing you don’t like. If a dog is pushy, Henry is pushier. If they’re brave, he stands his ground. If our dog gets too much attention, Henry walks up to him and bites him in the leg. This is a ten-pound cat taking on Rudy, a 70 pound dog. No problem. If things get too rough, he goes under the couch.

Henry sleeps a lot, as do most cats. He sheds over everything. If I wear black, I have his white fur on me. If I wear white, Rudy’s black fur tracks me down. He is always in the mood for a treat. And he likes to be where we are. His last word or best advice:  take a nap when you’re tired. Find the hottest place in the house if possible. Closets rule. Stretch out. Take over. The world is your oyster!