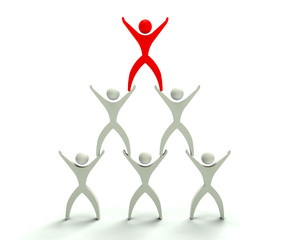 Here is a beautiful illustration of a human pyramid, and having spent a cold, winter’s afternoon with my three oldest grandchildren (ages 7, 9 & 11), I had the clever idea that we could build a pyramid. I, of course, was on the bottom, and as I felt their bony knees digging into my back, I held my breath, not wanting to be the one who brought the youngest child crashing down from the top. The parents were out and I had images of rushing one or more of them to the ER for stitches. We did not stand up. This was an on all fours pyramid and a wobbly one at that.

We tried different variations–two of us forming the base, then one, and the smallest again on top. No matter what we did we laughed so hard that the structure shook and collapsed. The dog thought it was a game and licked as many faces as he could reach. There is a certain kind of joy in destruction. I’m sure that’s why people like to watch buildings implode.

Build to crumble. Make something that can’t last. Fall down with it. Roll on the floor like a kid. Or a dog. Mess up. I haven’t had so much fun in ages, and no one was hurt in the making of this memory.