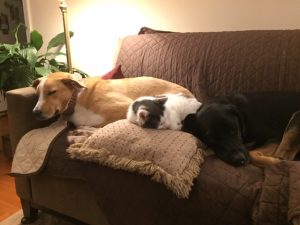 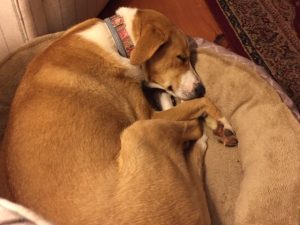 My sister calls Dixie, the dog we rescued five weeks ago (the tan and white one) my pandemic project. And I guess she’s right. We already had Rudy (the black dog–a bit hard to see) and Henry our cat. But when we saw a notice on a FaceBook forum that she had been in a shelter for 8 months and needed special care, we had to find out more about her.

We called the shelter and arranged to visit. As we parked the car, we saw her in a large fenced in yard with the volunteer, Diane. We glimpsed a sweetness in her face, but as soon as we walked into the enclosure, she ran as far from us as she could get. We chatted with Diane, we sat down, but she would come no where near us. Once Diane gave us pieces of chicken, Dixie would gradually approach as long as we didn’t move or look at her, and she’d grab the chicken and run. We stayed for almost an hour, wondering how we could adopt a dog we couldn’t get near.

We told Diane that we would return the next day with our dog, Rudy. We figured that would be the deal breaker–if they got along, we had hope. If they didn’t, it would be too hard. They got along, which says a lot about Rudy–he’s a large dog who likes pretty much everyone–and he and I have been missing our work as a therapy dog team during the pandemic.

We were still unsure. It was Friday and we told Diane that we needed to think about it carefully over the weekend and that we’d call her either way. There was another person interested in Dixie, but Diane felt that our home offered more stability, so we were at the top of the list. It’s all we talked about:   yes, we should do it, no, it was too much work–too disruptive. But something about her won out and on Sunday we called Diane and said that we’d be at the shelter Monday morning to bring her home.

The pandemic gave her exactly what she needed:  quiet, no guests, no travel, non-stop companionship from my husband and me, plus Rudy and Henry. Within a few hours she was a different dog. She took over the couch and smiled at us. She licked the cat. She and Rudy chased each other. We took her on hikes, and everyday she gets at least three walks.

Last week I was teaching a Zoom seminar for library staff about living through a pandemic, and through all the challenges, I kept hearing creative ideas. A children’s librarian built a set in her house for story time and other projects. Another bought chickens so that her family would have eggs. Others are involving their children in aspects of their work and learning to focus on tasks, instead of the overall job. Some are using meditation apps and are making sure to take breaks–especially outdoors. I told my class of almost 100 that I hoped that they would more than survive the pandemic–that they would learn to find new ways to do their jobs that were creative and satisfying. Just like adopting Dixie.